Voigtländer was a manufactorer of optical equipment – including cameras and camera lenses. The roots of Voigtländer goes back all the way to 1756, when the company was founded in Vienna. Even though the company ceased operations in 1972, the name Voigtländer lives on as a brand for a range of photographic equipment sold by Cosina.

The world´s first all-metal camera was the Ganzmetallkamera; a daguerreotype camera called No. 84 made by Voigtländer & Son in Vienna in 1840. Revolutionary for its time, it made it possible to reduce exposure time to roughly one minute. An original Ganzmetallkamera is exhibited at the Deutsches Museum in Munich, and a replica can be seen at the Swedish National Museum of Science and Technology in Stockholm.

Voigtländer was also a technology leader in the field of photography equipment for several decades of the 20th century, and the first manufacturer to introduce a number of new features that later became commonplace. They did, for instance, began selling a zoom lens for 35 mm still photography in 1959 (the (36–82/2.8 Zoomar) and a 35 mm compact camera with built-in electronic flash in 1965 (the Vitrona). 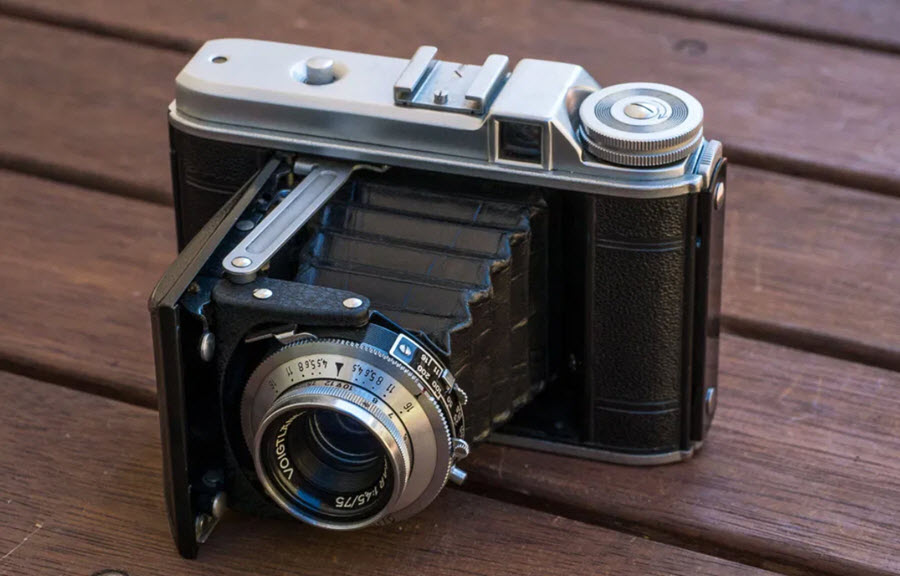 Johann Christoph Voigtländer was born in Leipzig in 1732, where his father was a carpenter. Voigtländer moved to Vienna in 1755 and worked in Meinicke´s workshop for mathematical instruments from 1757 to 1762.

In 1763, Empress Maria Theresa of Austria granted Johann Voigtländer a Shutzdekret (“Protection Decree”) on the “making of mathematical instruments and on an unspecified number of workers”. This allowed Voigtländer to establish a workshop with staff and sell his products without much competition.

In 1797, Johann Voigtländer recieved a Landesfabriksbefugnis, which was a type of national commercial license that came with various privileges. Among other things, Voigtländer was now allowed to establish branch sales offices in all major cities of the Austrian Empire.

Johann Voigtländer died in 1797, but the business survived in the hands of his widow and their children (three sons and one daughter).

When the existence of Daguerre’s process was publicly announced, without details, on 7 January 1839, it became a huge sensation not just in France, but internationally. Soon, the information had reached Vienna, where Johann Voigtländer´s grandson Peter Wilhelm Friedrich Voigtländer took the first step on a journey that would transform the family business into a leading photographic company.

In 1840, the Voigtländer company built the first Petzval lense, a camera lense that had 22 times the light-gathering capacity of Daguerre’s daguerreotype camera lense from 1839, and a maximum aperture of 1:3.6. The Petzcal lens (also known as the Petzval objective) had been invented in Vienna by the German-Hungarian mathematics professor Joseph Petval, with technical assistance provided by Peter Voigtländer. This was the world´s first photographic portrait objective lens, and it had a focal lenght of 160 mm.

In the 1840s, Peter Braunschweig set up a branch sales office in the city Braunschweig, which had become a central railway hub and also had better connections to German overseas ports than Vienna. He married a local Braunschweig woman, and after the unrest brought on by the Revolutions of 1848, Peter and his family moved from Vienna to Braunschweig and established a production site there. The Vienna facility was kept running until the Vienna works manager died in 1868.

The trailblazing Voigtländer of the 20th century

In 1923, 99.7% of the company shares were acquired by Schering AG´s photo division, who soon commenced large-scale production of Voigtländer products.

Despite new ownership, Voigtländer´s appetite for innovation was still there in spirit, and became clearly visible again in the 20th century when Voigtländer introduced several groundbreaking products, such as the zoom lense for 35 mm still photography premieerd in 1959 (the (36–82/2.8 Zoomar) and a 35 mm compact camera with built-in electronic flash launched in 1965 (the Vitrona).

Second half of the 20th century