Graflex was a United States manufactorer chiefly famous for creating the Speed Graphic, a camera much loved by photojournalists during much of the 20th century. You can even see a stylized logo of the Speed Graphic on the flag of the New York Daily News.

With roots going back to the 19th century, Graflex released their first camera just before the turn of the century, and produced large and medium format press cameras from 1912 to 1973.

The Graflex product range also included other things, such as rangefinder cameras, SLR cameras, and TLR cameras. During Graflex´s time as a division of Eastman Kodak, the Century Studio Camera was marketed under both the Graflex and the Kodak nameplates. 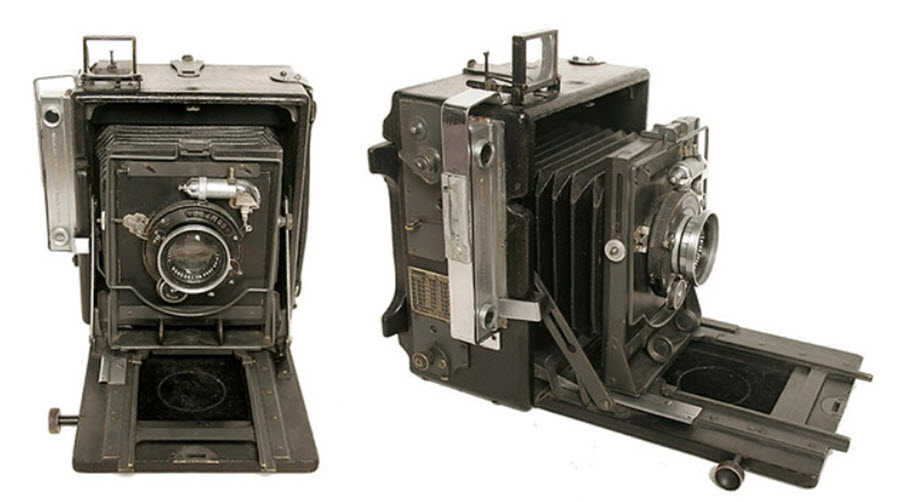 During much of the 20th century, the Speed Graphic in its various incarnations was the quintessential press camera. These folding cameras, manufactored from 1912 to 1973, had a focal plane shutter but no SLR swinging mirror or through-the-lens viewing. The design made the camera comparatively lighweight and it could be folded into a rugged boxy shape; two features greatly appreciated by press photographers on the go.

Photographers who wanted something even smaller and lighter than the Speed Graphic could opt for Graflex´s Crown Graphic, as the Crown had no focal plane shutter. This sacrifice made the Crown about one inch smaller and one pound lighter, and the absence of a focal plan shutter made it possible to mount a lense closer to the film plane.

In 1887, the gas lamp company Folmer and Schwing Manufactoring Company was founded in New York City by the William F. Folmer and William E. Schwing.

The business managed to survive the decline in gas lamp use by expanding into other markets, including photographic equipment and bicylces.

The Folmer and Schwing Manufactoring Company introduced the first Graflex camera in 1899. Their cameras became such a success that the company decided to cease producing other things and only work within the field of photography.

The 1899 camera is known alternatively as Graflex Reflex and Graflex Single Lense Reflex (SLR). It had swinging-mirror, through-the-lens viewing mechanisms and a focal plane shutter, and it quickly became a big hit with press photographers, sports photographers and fine art photographers. These early Graflex cameras came with a cloth shutter with a narrow slit that moved rapidly across the film plane, exposing only one small strip of the film at any given moment.

The Folmer and Schwing Manufactoring Company was acquired by George Eastman (founder of the Eastman Kodak Company) in the early 1900s and soon became the Folmer Graflex Division of Eastman Kodak.

During this period, Graflex cameras were manufactored in Eastman Kodak´s Rochester plant for professional equipment.

In 1926, Kodak divested itself of its professional equipment division to comply with the Sherman Anti-Trust Act, and the Folmer Graflex Division became the Folmer Graflex Corporation. In 1946, the name was changed to Graflex Inc.

Graflex Inc. was an independent company until 1956 when it was acquired by the General Precision Equipment Corporation. After twelve years as a division of GPEQ, it was purchased by the Singer Corporation, who ran it as a division until 1973.

The end of Graflex

In 1973, Singer put an end to Graflex, and the equipment was sold to the Toyota Corporation.