Kiev was a brand of photographic equipment, including cameras, manufactured at the Arsenal Factory in Kiev, Ukraine. Older cameras carry a nameplate in Cyrillic; either КИЕВ” (in Russian) or “КИЇВ” (in Ukrainian). More recently manufactured cameras have a nameplate sporting the Latin alphabet instead (KIEV).

The two most well-known Kiev cameras are the Kiev-88 and the Kiev-60. Both are 6 x 6 medium-format cameras.

In 2009/2010, the Arsenal factory closed and the manufacturing of Kiev products ceased.

For many aspiring photographers, Kiev made it possible to enter the medium-format camera world on a budget. This affordability extends to the Arsenal-made lenses for Kiev cameras; lenses that despite their low-cost were known to be of high-quality optic wise. (Many of them were based on Zeiss designs.)

In the 1990s, it was possible to achieve a Kiev medium-format camera setup (including Soviet or Ukrainian lenses) for roughly 10% of what it would have cost to put together a similar Hasselblad setup. By the mid-2000s, more reliable brands such as Pentax, Bronica and Mamiya managed to get their prices down to levels where they could compete with Kiev in the low-cost medium-format camera segment.

Until the mid-200s, the comparatively low price of the Kiev cameras made them sought after despite their well-known quirks and the notoriously fluctuating quality control at the Arsenal factory. Many photographers ended up with cameras with cosmetical inconsistencies but loved them just the same. Others got cameras with functional problems that had to be fixed or just accepted. 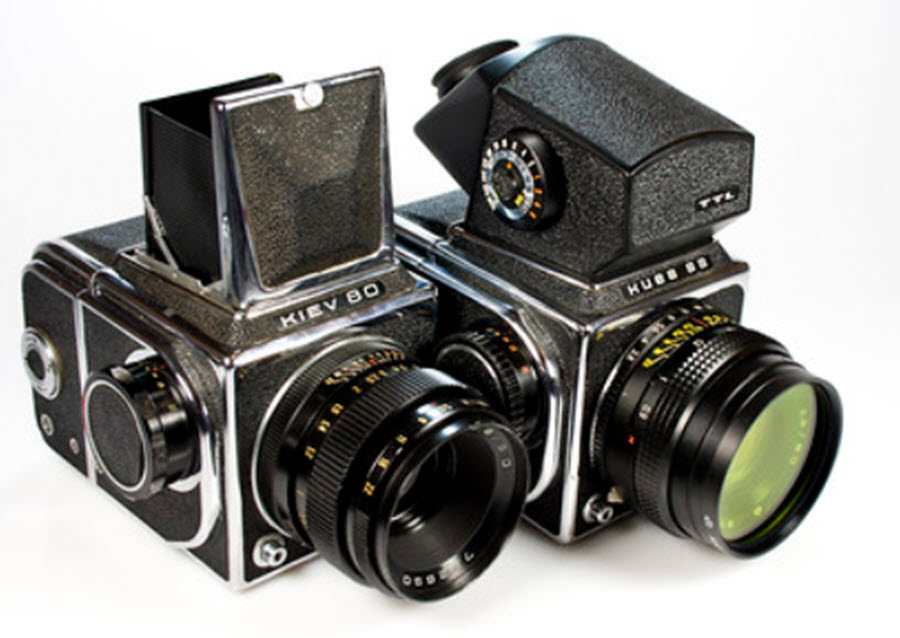 Originally named Salyut, this camera was so strongly inspired by the Hasselblad 1600 F that some consider it a (inferior) clone, and it is jokingly known as the “Hasselbladski”. Very early Salyuts have a self-timer mechanism below the film advance knob, a feature not found on the Hasselblad 1600 F, but this alteration was soon scrapped.

In many ways, Kiev 60 is similar to an englarged 35 mm SLR. Kiev 60 is losely based on the Pentacon Six, a single-lens reflex (SLR) medium format camera system made by East German manufacturer Pentacon from 1966. Among other things, Kiev 60 has the same breech-lock lense mount as the Pentacon Six.

Compared to the Pentacon Six, the Kiev 60 has a simpler frame-advancement mechanism. It is not unsual for it to be poorly adjusted, which results in incorrect frame spacing.

Kiev 60 has no removable film back, which reduces the risk of light leaks (a known problem with the Kiev 88).

Both waist level finder and metered prism finder are available for Kiev 60.

The addition of a mirror lock-up feature is fairly common amodification for Salyut-C, Kiev-88 and Kiev-60. Without this modification, blurriness can be caused by the mirror hitting the top of the mirror box just before the shutter opens. The risk of noticable blurring is especially hig when the photographed object is greatly magnified.

A camera called Kiev 645 or similar is usually a Kiev-60 that´s been altered to shoot with a 6 x 4.5 frame size instead of 6 x 6. This yields more pictures per roll of film. Since the film feeds sideways, the rectangular photos will be portrait-style, not landscape-style.